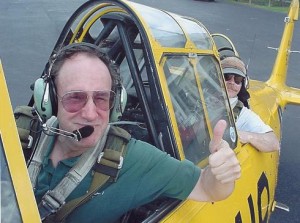 Getting ready to knock some “bogies” out of the sky, in an AT-6 “Texan” from World War II.

I wrote my first story when I was eight.

It was about “the Clantons,” an early-1900’s Wisconsin family that had the first car on the block. It was eight hand-written pages. From that moment on, I was hooked on the written word…on its power, on its beauty, and on the magical ways in which it can be used to tell a story. I haven’t stopped writing since. (And I still have that story about the Clantons.)

By the age of twelve, I had already written a number of other stories, one of which was fifty pages long.

At the age of fifteen, I had a fairly-substantial article in New York’s Newsday. And that’s when I realized that, maybe, I could actually make a living doing what I love. I should have studied it in college, really. But my generation was too concerned with saving the world, so I studied pre-Law instead. The night of my college graduation, after I handed in my cap and gown, my Dad drove me to Kennedy Airport in New York City . By the next morning I was hitch-hiking through Ireland and living out of a backpack…with the acute realization that I should have studied English and literature in college.

I spent much of the next several years living out of that backpack, hitch-hiking through Europe and the Middle East, and writing about my experiences.

By the time I was in my mid-twenties, I was getting published fairly regularly, in everything from business and trade publications to Newsday (full-page articles by now, about world-events such as the conflict in Northern Ireland and the separatist movement in Quebec) and literary magazines.

And, by my early thirties, I was getting paid pretty decent rates to write articles for major magazines and newspapers. Then, to write or contribute to books. And I was accomplishing all of this while still holding a full-time job.

In pursuit of “The Story,” I’ve been shot at in Northern Ireland. Been a cowboy in Arizona. Jumped into an alligator pit in the Everglades. Flown World War II fighter planes in aerial “combat.” Climbed up to 15,000 feet in the Rockies. Explored ice caves in Switzerland. Trekked glaciers in Alaska. Driven an ATV up an 11,000-foot peak in Colorado, and – much scarier – back down again, with the wheels hanging over the edge of a several-thousand foot drop! Hiked on the Appalachian Trail (and had a climbing accident in which I nearly fell to my death). Lived on a barge in France. Slept under bridges in England. Climbed the Rio Grande Gorge in New Mexico. Run Class V rapids (suicide wish!) in French Canada. And been thrown out of a reception given by the Queen of England for the British Olympic team.

In May of 2006, I left the corporate world to pursue my lifelong dream of writing full-time. These days, instead of a suit and tie, I generally wear a “University of Miami Hurricanes” t-shirt to work. And, unless I’m out of town, my commute is down the hallway instead of down the highway.

But, each time I sit down in front of my computer, I still feel the same challenge, and the same rush of excitement. It’s the challenge of getting what it is in my heart – using my hands as my instruments – onto the screen.

And, when it works, when the “flow” is rushing from my heart through my hands, I still get that same “sweet chill” I first felt all those years ago, when I wrote about “the Clantons.”